The factory at Herend was founded in 1826 by Vince Stingl as an earthenware pottery manufacturing factory; Stingl also carried out research experiments on porcelain making. Stingl ran out of funds and subsequently went bankrupt; his creditor Mór Fischer took control of the factory in 1839. Fischer, an ambitious man with new ideas, started manufacturing artistic porcelain in the same year. At that time it was almost impossible to replace broken pieces and supply old, classical porcelain dinner-sets from the Far East and from Europe; so by 1849 Fischer's was selling his wares to the Hungarian aristocracy.

Lajos Kossuth, the famous Hungarian president once said[3] due to the achieved successes about the Herend Porcelain Manufacture:

Herend displayed its designs at the First Hungarian Applied Art Exhibition, the Vienna Exhibition in 1845, the Great Exhibition in London, 1851, the Exhibition of the Industry of All Nations in New York, 1853 and the Exposition Universelle in Paris, 1855. The styles became popular, and orders were received on behalf of several royal courts: Queen Victoria, Francis Joseph I of Austria, Maximillian, the Mexican emperor. 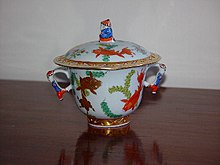 Some well-known patterns were named for the first customers: (Queen Victoria, Esterházy, Batthyány, Rothschild, Apponyi). In 1865 Francis Joseph I gave a noble title to Fischer, in appreciation of his work in porcelain art. From 1872 Mór Fischer Farkasházy, Purveyor to the Royal Court, was entitled to use the shapes and patterns of the Manufactory of Vienna, which had closed down.

In 1874 Fischer gave the management of the manufactory to his sons. These men changed the focus of the company away from artistic creation, and sales began to decline. The factory had several owners, and went almost bankrupt. At the end of the century, the grandson of the founder, Jenő Farkasházy, became the owner of the factory. Farkasházy was a trained ceramist, who had gained experience in foreign factories and began to create new designs and revive traditional patterns. He also introduced novelties in 1900 Paris and 1901 St. Petersburg.

Between the two world wars, limited reproduction of traditional products, from the age of Fischer, was continued. Hungarian figures were also manufactured, replicas of the work of Hungarian sculptors.